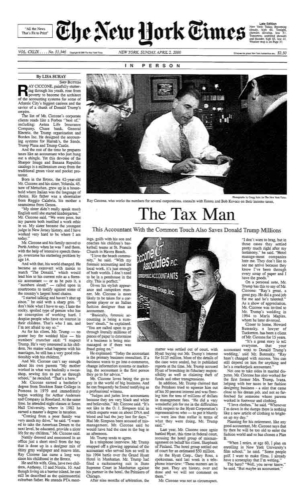 RAY CICCONE, painfully stuttering through his youth, rose from poverty to become the architect of the accounting systems for some of Atlantic City’s biggest casinos and the savior of a chunk of Donald Trump’s empire.

The list of Mr. Ciccone’s corporate clients reads like a Forbes ”best of,” including: Aetna Life Insurance Company, Chase bank, General Electric, the Trump organization and Borden Inc. He designed the accounting systems for Harrah’s, the Sands, Trump Plaza and Trump Castle.

And the rest of the time he prepares taxes like an accountant who just hung out a shingle. Yet this devotee of the Sharper Image and Banana Republic catalogs is a millennium away from the traditional green visor and pocket protector.

Born in the Bronx, the 42-year-old Mr. Ciccone and his sister, Yolanda, 45, now of Metuchen, grew up in a household where Italian was the language of choice. His father was a shoemaker from Reggio Calabria, his mother a seamstress from Genoa.

”My sister didn’t really speak much English until she started kindergarten,” Mr. Ciccone said. ”We were poor, but my parents both instilled a work ethic in us. My sister became the youngest judge in New Jersey history, and I have worked very hard to be where I am today.”

Mr. Ciccone and his family moved to Perth Amboy when he was 7 and there, with the help of intensive speech therapy, overcame his stuttering problem by age 14.

And with that, his world changed. He became an extrovert with moxie to match ”The Donald,” which would lead him to his current role as a forensic accountant — or as he puts it, a ”numbers sleuth” — called upon in courtrooms to testify against some of the country’s largest hotel chains.

”I started talking and haven’t shut up since,” he said with a sharp grin. ”I don’t hide what I have to say. I hate the cocky, spoiled type of person who has no conception of working hard. I despise people who have no interest in their children. That’s who I am, and I’m not afraid to say so.”

As for his client, Mr. Trump — no poster boy for wedded bliss — his numbers’ cruncher said: ”I respect Trump. He’s very interested in his children. No matter what happens with his marriages, he still has a very good relationship with his children.”

And Mr. Ciccone can’t say enough about his own parents ”My mother worked in what was basically a sweatshop, sewing ties to put us through school,” he recalled. ”That’s a hero.”

Mr. Ciccone earned a bachelor’s degree from Stockton State College in Pomona in 1979 and immediately began working for Arthur Andersen and Company in Roseland. At the same time, he attended night classes at Seton Hall University, where in 1982 he earned a master’s degree in taxation.

”Coming from a poor family was very much my drive,” he said. ”I wanted to take the American Dream to the next level, be educated, provide a nicer life for my children,” Mr. Ciccone said.

Nattily dressed and ensconced in an office just a short stroll from the bay that is done up in a designer mix of shiny gray wallpaper and mauve trim, Ray Ciccone has came a long way since his childhood in the Bronx.

He and his wife, Gina, have two children, Anthony, 12 and Nicole, 10. And though living on a barrier island, he can still be described as the quintessential suburban father. He attends PTA meetings, golfs with his son and coaches his children’s basketball teams at St. Francis Church in Haven Beach.

”I love the beach community,” he said. ”With my forensic accounting and the local work, it’s just enough of both worlds. I don’t need to be in a penthouse in the city. This is perfect.”

Given his stylish appearance and outspoken manner, Mr. Ciccone is more likely to be taken for a corporate player or an Italian fashion designer than an accountant.

”Basically, forensic accounting is being a numbers’ sleuth,” he explained. ”You are called upon to go through literally millions of pieces of paper to determine if a business is being mismanaged or if there was fraud going on.”

Mr. Ciccone loves being the go-to guy in the world of big business. And he can frequently be found testifying as a professional witness.

”Judges and juries love accountants because they are very black and white and believable,” Mr. Ciccone said. ”It’s not like in the O. J. Simpson trial in which experts went on about DNA and blood and had the jury lost for days.” Had Mr. Simpson been accused of mismanagement, Mr. Ciccone said he would have had the case in the bag in an afternoon.

In a telephone interview, Mr. Trump snapped off a glowing appraisal of the accountant who served him so well in his 1994 battle over the Grand Hyatt Hotel in Manhattan. Mr. Trump had filed a racketeering suit in State Supreme Court in Manhattan against his partner in the hotel, the Pritzkers of Chicago.

After nine months of arbitration, the matter was settled out of court, with Hyatt buying out Mr. Trump’s interest for $125 million. Most of the details of the case were sealed, but in published reports at the time, Mr. Trump accused Hyatt of breeching its fiduciary responsibility as well as claiming theft of funds and other transgressions.

In addition, Mr. Trump claimed that the Pritzkers tried to squeeze him out of his 50 percent interest and was fleecing him for tens of millions of dollars in management fees. ”He did a very wonderful job for me in the difficulties with respect to the Hyatt Corporation’s representatives who — to put it bluntly — were less than stellar in terms of what they were doing, Mr. Trump said.”

Last year, Mr. Ciccone once again battled Hyatt, this time in federal court, accusing the hotel group of mismanagement on behalf his client, Skopbank of Finland. The hotel group settled out of court for an estimated $50 million.

At the Hyatt Corp., Gary Ross, a spokesman, said last week in a telephone interview: ”These matters are in the past. They are history, over and done and we will not comment on them.”

Mr. Ciccone was not as circumspect. ”I don’t want to brag, but in these cases they settled pretty much right after my testimony,” he said. ”Hotel management companies hate me. They don’t like to see me arrive because they know I’ve been through every scrap of paper and I have the goods.”

On a personal note, Mr. Trump has this to say of Mr. Ciccone: ”Ray’s great, a great guy. He did a good job for me and he’s talented.” As a show of appreciation, Mr. Ciccone was invited to Mr. Trump’s wedding in 1994 to Marla Maples, whom he later divorced.

Closer to home, Howard Butensky, a lawyer of Tuckerton, has been a client of Mr. Ciccone for 15 years.

”It’s a great story to tell everyone, that your accountant went to Donald Trump’s wedding,’ said Mr. Butensky. ”Ray hasn’t changed with success. You can still depend on him for anything and he’s a crackerjack accountant.”

Not one to take sides in marital disputes, Mr. Ciccone has also worked for the first former Mrs. Trump, Ivana, helping with her taxes in her fashion designing business — a stint that came close to his dream job, and not so far-fetched for someone whose parents worked in footwear and clothing.

”I love clothes,” he said. ”Whenever I’m down in the dumps there is nothing like a new article of clothing to brighten up my day.”

Planning for his retirement, like any good accountant, Mr. Ciccone says that by then he will be too old to enter the fashion world and so has chosen a Plan B.

”When I retire, at age 60, I plan on enrolling in New York University’s film school,” he said. ”Some people golf. I want to make films. I already have a screenplay that I’m writing.”

The hero? ”Well, you never know,” he said. ”But maybe an accountant.”

It’s Time To Pay Up. Here Are Tax Tips.

WITH the April 15 income tax deadline looming, perhaps some advice is in order.

Ray Ciccone, an accountant for Donald Trump and for several major corporations in the region, has compiled a list of tax tips for individual taxpayers and small businesses.